Coordinate Systems There are several coordinate systems involved with using a tile service like Virtual Earth. Virtual Earth and other tile services divide the world in to fixed size tiles at different zoom levels denoted by z, where the number total number of tiles is 22z. The map in this example is at zoom level 3 so there are 64 tiles total, and is derived from the images in Virtual Earth article in the Microsoft Bing Help Docs (http://msdn.microsoft.com/en-us/library/bb259689.aspx). 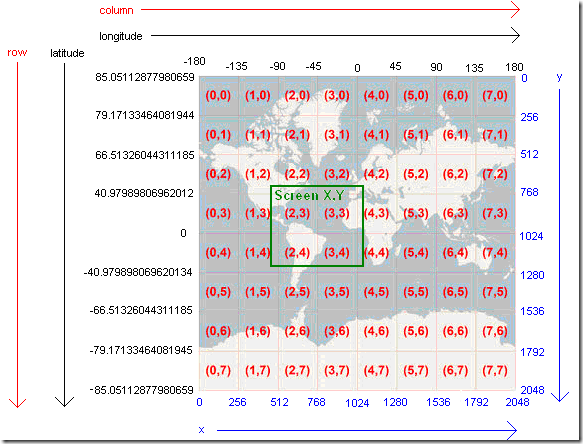 The world geographic coordinate system (represented in black) is in latitude and longitude and runs from approximately 85 to -85 latitudes and -180 to 180 longitudes. Due to the way the earth in compressed in a tiled map, the lines of latitude are now evenly spaced even through they are the same pixel distance apart. This requires a formula to be used to determining latitude that takes into account this difference.

The tile coordinate system (represented in red) is in row and column, and describes the position of tiles on the world map. All tiles are of a fixed size, though typically at a size of 256 pixels as in the example map, and run from top left to bottom right. Positions in between the upper left corners of tiles are represented using decimal values, so for example (1.5, 0.5) would be in the exact center of tile (1.0, 0.0).

The world pixel coordinate system (represented in blue) is in x and y, and runs from top left to bottom right. It is used to describe the tile coordinate system where tile (0, 0) corresponds to pixel (0, 0). The map size in pixels is ts(2z),where the tile size is denoted as ts and is 256 while z denotes the zoom level and is 3 in the case of the example map.

The screen pixel coordinate system (represented in green) is in x and y, and describes the position of the screen (actually the component displaying the map) in relation to the world map. Because at most zoom levels the world map in pixels is larger than any monitor can display, only the portion of the map which can be seen within the map component is rendered. This means that the size of the component being displayed is dynamic and dependent on the specific application’s usage, as well as how the local x and y relates to the global x and y of the world pixel coordinate system. 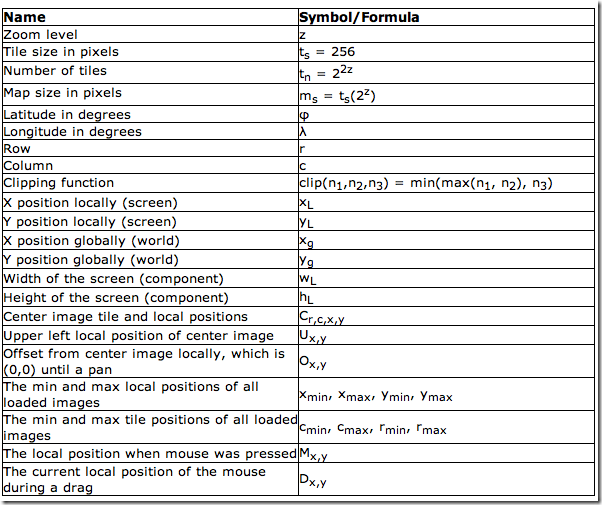 Latitude and longitude to row by column 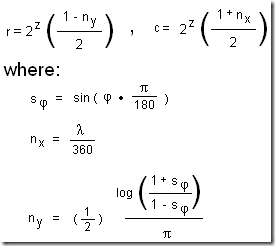 World x and y to latitude and longitude 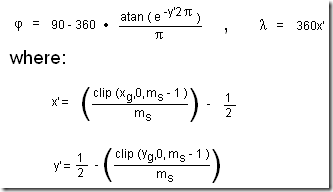 Tiles are requested based on retrieving them one at a time from a URL. How a URL is generated depends on the particular tile server and in the case of this map component only the Virtual Earth tile servers are used. The URL is used to specify the type of image, its zoom and location, and its file type. All files types in Virtual Earth are of PNG or JPG, and the location must be given using the quad key. The quad key is a compressed representation of the tile location using the row, column, and zoom.

The following shows how to generate a quad key using the row, column, and zoom using a Java-like syntax:

Only the tiles which are within view of the screen (component) need to be displayed, which means that those should be the only ones to be requested. Once a tile is displayed in order to cut down on loading and rendering time the map component stores the tile, and when it is no longer in view keeps the tile in memory but removes it from the display. For example if the map is to be centered at the tile location of (3.5, 3.5) and is component displaying the map is only large enough to display half of each surrounding tile, than only 9 tiles need to be requested.

In order to know which tiles to display and where a center coordinate must be known. Given that center coordinate and the size of the area that will display the map, the tiles to be displayed and their position within that component can be determined. 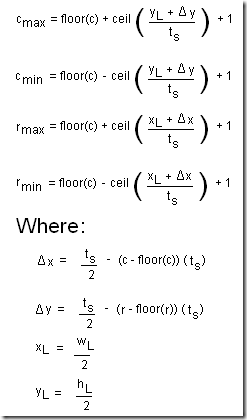 Given a coordinate in latitude and longitude to be the center on the map to be displayed, that coordinate can be converted to a tile location in row by column. By using that row and column the range of tiles to be retrieved and displayed can be determined using the amount of space available on the screen and the tile size. The row and column minimums and maximums denote the range of tiles to be displayed, and the delta x and y are used to calculate the pixel distance from the center of the center tile to its upper left corner. This is used to determine how many tiles can fit above, below, to the right of, and to the left of the center tile according to its current position in the center of the screen.

For example if the center coordinate translated to (c, r) = (2.5, 4.5 ) at zoom level 3 and the screen was 512 by 512 pixels, then the column and row minimums and maximums would be calculated as approximately the tiles needed to cover the size of the current screen.

With the range or rows and columns for all tiles to display, given the row and column of a tile its local position in x,y is calculated in the following way: 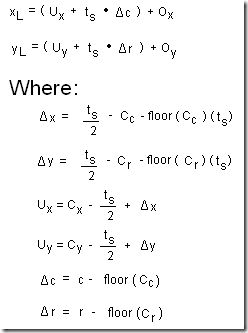 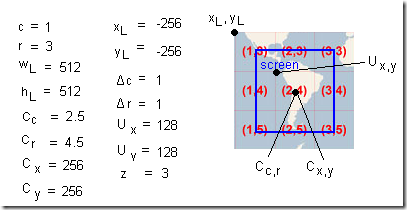 The end result is that the user should be able to click and drag the map in order to move it around (or to pan). This requires keeping track of where the mouse was clicked, where it was dragged to, and when it was released (to stop worrying about where it is being dragged). During a drag the difference between the current mouse location and the location of the original click can be calculated, and then used to determine the new offset to apply to the map along with the new visible rows and columns. 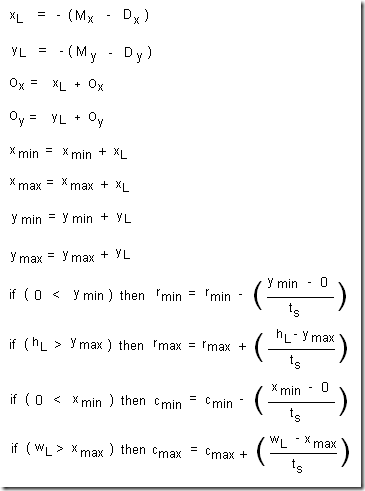 The variables such as the x,y and r,c min and max values need to be kept track of through the map component life cycle. This is because positioning is done using an offset based on the starting location of the center tile. The offset is calculated using the inverse of the change in mouse position during the click and drag. For example if the user clicks on the map and drags right, more of the map needs to be proportionally drawn to the left. The x and y min and max are used to track the size of the tile area in pixels, in order to determine the how many more tiles are needed at the new map boundaries in terms of rows and columns.

The following shows how the variables in the map panning equation are changed when the screen view (512 by 512 pixels) is moved up on the map by 256 pixels:

Zooming in on a Set of Locations 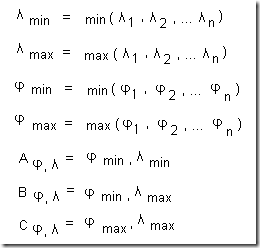 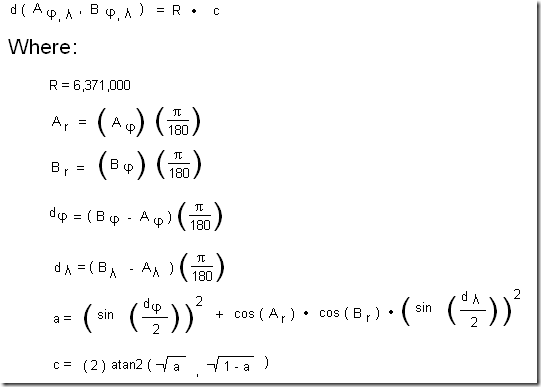 Calculating the Desired Meters per Pixel

With the the ability to calculate the distance between geographic coordinates, the size of the geographic area to be zoomed in on can be calculated by determining the meters per pixel required to cover the area. This formula assumes a fairly square screen, because it takes the largest distance and meters against the smallest pixel length of the required screen area. 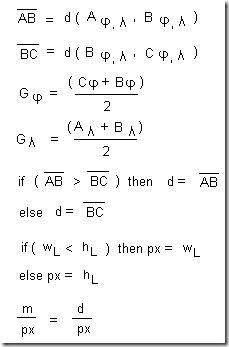 For example using the distances AB and BC, since AB is the largest it is used to calculate the meters per pixels required to display all of the points within the area of rectangle ABC with center G. 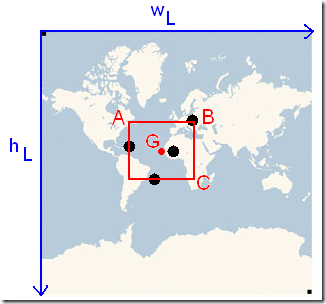 Finding Zoom Level based on Meters Per Pixel 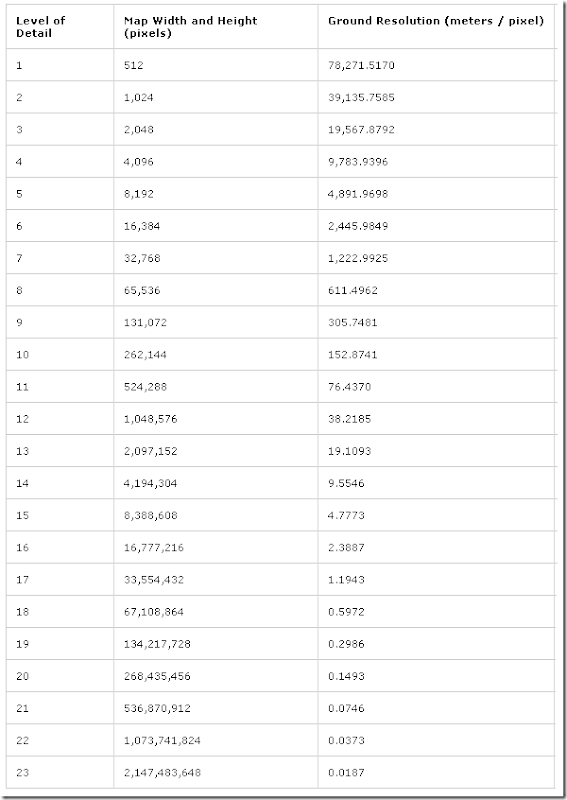