A typical model for building a Flex application is to just use one SWF file. That is because by default when you create a Flex project in Flex Builder your main application MXML and all of the classes that it references are compiled into a single SWF file. 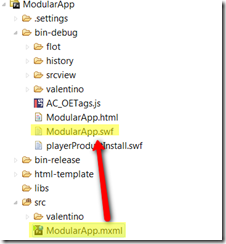 Flex Builder then embeds that SWF file in an HTML page where you can then upload it and the Flex content somewhere, and when people visit that page it and the SWF file are downloaded by their browser and Flex application is executed.

It helps to conceptualize as an application in terms of its views or screens. For example an application may consist of a screen to login, a screen to create an account, and so on. In the single SWF model that single file contains all of these different views. You begin to get into trouble when you have a lot of different views, which causes the single SWF file to become large.

For example you could have an application that has 10 different views where each view adds about 200 KB to the application size, the result is that you end up with a 1.95 MB file that the user has to download at one time to run it. This of course would be come a problem when you have a lot more views, views that are larger, or a combination of both.

I really haven’t been ever able to find a definitive source that explains all of the different ways to use modules, which is why I am writing this. When it comes to modules there are two general approaches:

I will attempt to explain both approaches, with more emphasis on the pragmatic since a working application accompanies this writing.

Application Domains in the case of modules are used to determine what parts of a module are actually unloaded when they are unloaded. The following are the two methods in which this functionality is controlled:

Current Domain Method – This makes it do modules never really unload, and that their definitions are kept around for the lifetime of the application. The result is modules load faster the second time they are loaded because they never really unloaded in the first place. 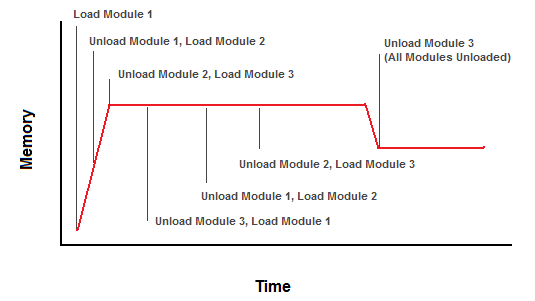 Copied Domain Method – This is the default behavior and is supposed to allow modules to truly unload. The result is that modules always take the same amount of time to after unload since they have to be completely reloaded. 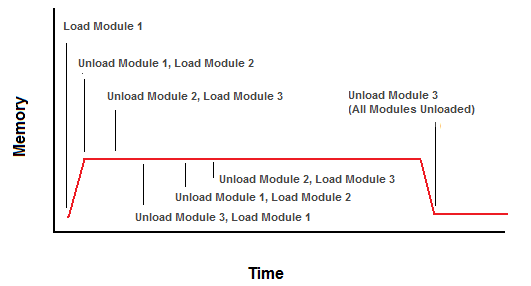 The Realities of Modules

Basically looking at a module wrong will cause it not to unload when using the Copied Domain (Default) Method. The following are culprits for the modules persisting, each of which I have implemented resolutions:

Even with these resolutions there is ultimately a problem that is an article unto itself regarding how the memory required to render components becomes fragmented over time, eventually preventing objects that should be eligible for collection from by collected. I will get around writing about it and the proof of its existence later, but for right now just be aware of its effects. Its effects are most noticeable in Flex applications that run at high resolutions, because the larger in size the component the more memory that is required for rendering it.

This basically means that in larger and/or graphically rich applications if you have to render a lot of content over and over you will run out of memory and there is nothing you can do about it. Using the current domain method will mitigate this problem, but then you have to be sure that your application’s definitions can fit within whatever the requirement is for client memory. Even then you will still encounter the problem within rendering memory fragmentation.

What can be done?

Once a module has been created store its instance and then retrieve it the next time it is needed. This however requires enough memory available to be able to go to every module in the application, or however modules it is possible to go to.

The result is a memory profile that looks like the following with modules in which the instance never go away:

Using this method you can load modules over and over again without having to worry about the issue with rendering memory fragmentation (unless there is a substantial amount of dynamic manually drawn content).

The resulting secondary load times are also much faster than when using the Current Domain Method:

What are my options?

How are all these options implemented?

The following is a test application featuring a ModuleManagerUtil class and a MemoryManager class.

Please be aware that the debug version of the Flash Player always leaks modules, so if you are using the debug player just about everything is going to leak. See the following for more information: http://jvalentino.blogspot.com/2009/05/flex-memory-tip-1-debug-player-always.html 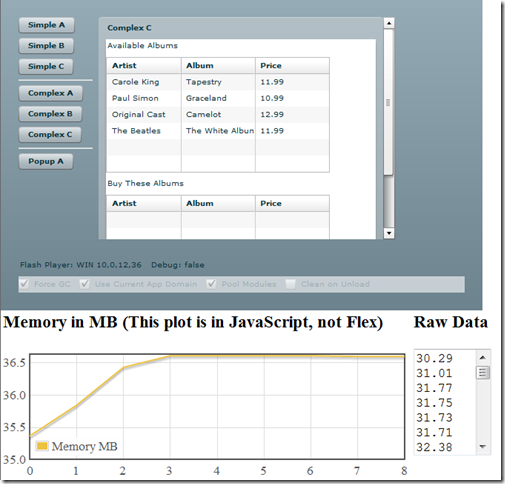 About the Sample Application

The ModuleManagerUtil class is used to handle loading and pooling modules.

The MemoryManager class is used to get the current amount of memory in use by the Flash Player and force garbage collection.

The buttons on the left are used to load different modules. The simple modules just contain panels, the complex modules contain DataGrids, and the popup module will load a module as a popup.

The bottom of the page is a JavaScript plotting application done using Flot, so display memory without interfering with what is going on in the Flex application.